The discussion forum for Sport Pilots and Light Sport Aircraft

Here's the place for you to post videos and photos of your favorite airplane or most interesting flight. Commercial posts should go instead into the Want Ads forum.

Not really eye candy per se (couldn't think of where else to put it, so feel free to move this thread, Paul), but here's a shot of my VFR flight plan that I flew yesterday to attend a work meeting. (Had I gone via mass transit, it probably would have taken me 9 hours total roundtrip; had I tried to drive, likely 7 hours total roundtrip. Flying allowed me to make it in 4 1/2 hours total roundtrip -- 2.8 hours on the Hobbs -- and likely would have been less had the engine not required pre-heating on both ends, and an extended runup to get the oil temp into the green.)

I wasn't able to get any really good pictures while flying because I was too busy flying straight/level at fairly low altitudes, listening to NY Approach/Departure, and avoiding the heavies going into/out of JFK, but it was otherwise a really easy flight, and I encourage those of you with Class B endorsements to not be intimidated by NYC airspace. A few things to keep in mind:

Really practice to work the "ah's, um's, errrr's" and whatnot out of your vocabulary. Be crisp and be clear: "NY Approach, Skyhawk 682 Mike Alpha, VFR request." Once I was acknowledged, "Yessir, 682 Mike Alpha is a Cessna 172, 5 miles south of Brookhaven Airport just off the south shore at 2,500 feet, would like flight following to Trenton, that's Tango Tango November" (that was my tail number and my actual radio calls just after I took off from HWV). So far, I'm 8 for 8 in getting both flight following and clearance into the Class B.

Don't be surprised if the radio is so busy that you can't check in when handed off. On the way back, I tried to check in (twice!) after one handoff and never got an acknowledgment, so I just kept trundling along. They eventually did get to me about 5 minutes later (to tell me to stay at 4,500 to avoid the inbound Newark traffic).

Be flexible, and make that known to ATC.
On the way out, I asked for and got 3,500 feet, but told ATC I could fly low if need be. Sure enough, they asked me to descend just as I was approaching Sandy Hook, NJ to get under the Class B shelf -- got down to 1,300 feet and was only there for about 10 minutes (watched a jet cross my nose from right to left as it approached and landed into JFK) before they cleared me back into the Class B at 3,500 feet.

On the way back while flying off the south shore, I asked for and got 4,500 feet, but also told them I could deviate and descend as necessary. They wound up vectoring me back over Long Island itself, had me fly direct to the Kennedy VOR, then turn to 220 once over JFK. (It was very cool to see the heavies taking off and landing from JFK...although it was a little disconcerting to see a heavy off my right wing heading right at me at one point, and then I heard NY App clear them to descend to 4,000 feet while I was still at 4,500!

(Yeah, I initially misunderstood the part where I was supposed to go directly to the Kennedy VOR before turning 220...thought he instructed me to turn to 220 immediately. And I did confirm with the next controller via readback, if I recall correctly.)

Have a life vest!
You can be a lot more flexible flying out over the water to give ATC more room to work with you, and still stay legal.

Hope this may help any of you with NYC Class B anxiety...feel free to ask questions, I'll answer as best I can (given that I'm still a low-time pilot...I only cracked the 70TT mark on this trip.) 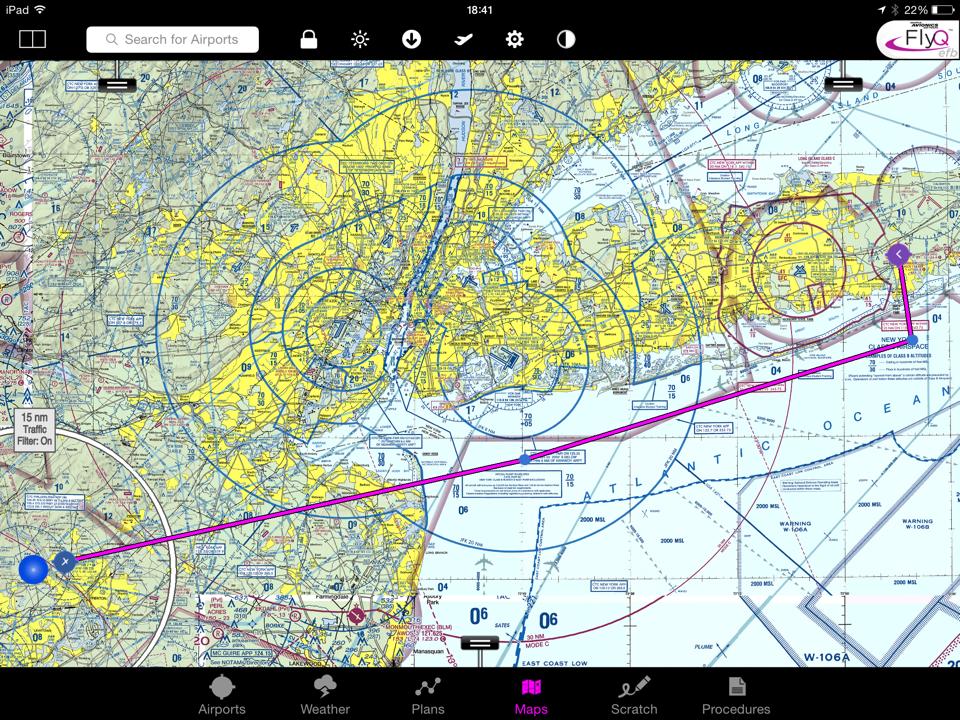 Yup. However, I personally prefer to be talking to ATC and under flight following if at all possible (unless I'm just heading to the practice area to do stalls, etc.). Plus, altitude gives more options if something bad happens.

When I did my flight up to OWD back in November (the day after I passed my checkride), NY App actually had me go over the Class B at 7,500, but I had to descend into the Class B due to clouds. Had I tried to stay under the respective shelves, it would have added somewhere around 20-30 minutes each way just for the deviations around the down-to-the-surface cores.
Last edited by AJChenMPH on Wed Jan 14, 2015 3:38 pm, edited 1 time in total.
Andy / PP-ASEL
Top

Looks to me like you did an excellent job!

Good planning, thorough and conscientious performance. As a guy who used to fly those heavies into JFK we often had the VFR traffic pointed out and/or would get them on TCAS but at our speeds and the high workload a smaller airplane flying low along the beach or just offshore aren't always easy to see.

You're right, thinking about the way you'll communicate with ATC, and doing it in a professional manner, will be rewarded with much better handling.

Posting your experience certainly does help encourage sport pilots gain confidence in what they can achieve as pilots and what their airplanes are capable of doing in a busy airspace. Also, it encourages ATC to know that working with LSA and GA pilots can be a good experience.

AJChenMPH wrote:Yup. However, I personally prefer to be talking to ATC and under flight following if at all possible (unless I'm just heading to the practice area to do stalls, etc.). Plus, altitude gives more options if something bad happens.

More options not flying over open water too... I would have probably pushed that course line north a bit and hugged the coast as best I could. If I have to land in water, I want it to be about 50 feet from dry land.

Looks like a good flight though, and a good way to save some time over driving!
Andy Walker
Athens, GA
Sport Pilot ASEL, LSRI
2007 Flight Design CTSW E-LSA
Top

Howard: thanks, and high-five back atcha!

Andy: hear you loud and clear. But I figured if I could get higher, I didn't mind rolling the dice a little and going a little further south to stay out of everyone's way, and still make the beach if something bad happened. I was prepared to start flying closer to the core if they wanted me to stay below the Class B shelf.
Andy / PP-ASEL
Top

Andy: hear you loud and clear. But I figured if I could get higher, I didn't mind rolling the dice a little and going a little further south to stay out of everyone's way, and still make the beach if something bad happened. I was prepared to start flying closer to the core if they wanted me to stay below the Class B shelf.

I hear you. Honestly, you are probably only a couple of miles offshore from what I see on that map, you could probably glide in pretty close to shore if the engine quit.
Andy Walker
Athens, GA
Sport Pilot ASEL, LSRI
2007 Flight Design CTSW E-LSA
Top

I actually flew just north of the magenta line for most of the outbound flight, so I was even closer to the coast than perhaps I'd initially made it out to be.

Found the archive of my exchange with NY App on the way home with the course deviations and all...see the initial post.
Andy / PP-ASEL
Top

A few shots from this past weekend (finally got around to resizing them for posting):

- On the way out to KBID/Block Island, a work colleague/friend (who's a non-current pilot) and I flew south of KJFK over the water -- got the shot of the airfield as we were on our way up to 5,500'.

- A shot of Lower Manhattan at 6,500'. Coming home from KBID and flying into KLDJ/Linden, NJ to drop off my friend, Newark Approach gave us a vector that took us south right over the Hudson River, and allowed us to get the shot. 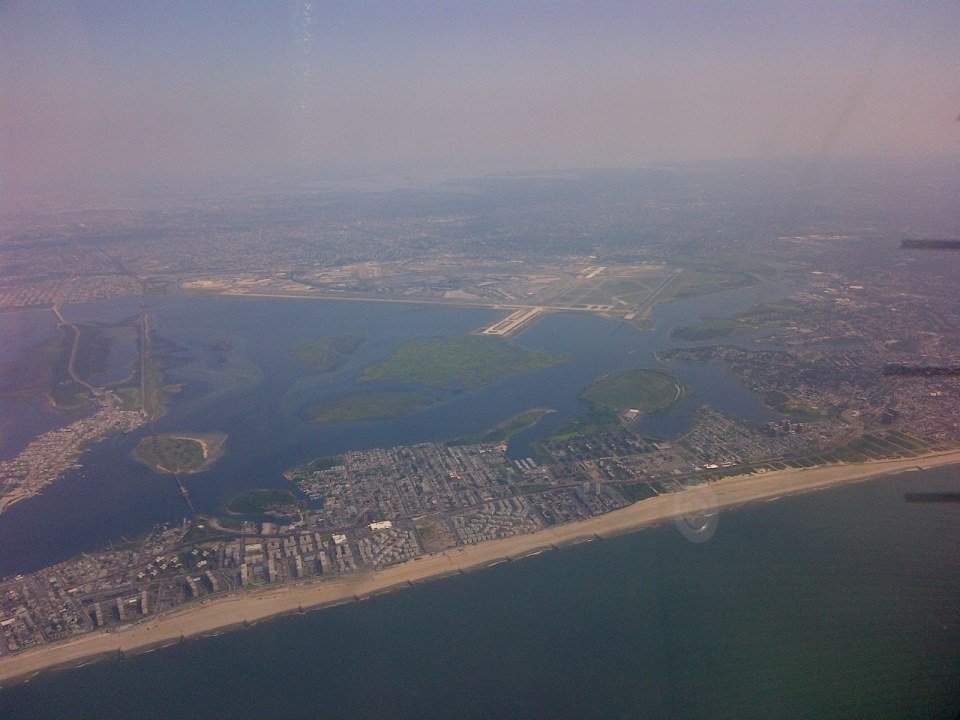 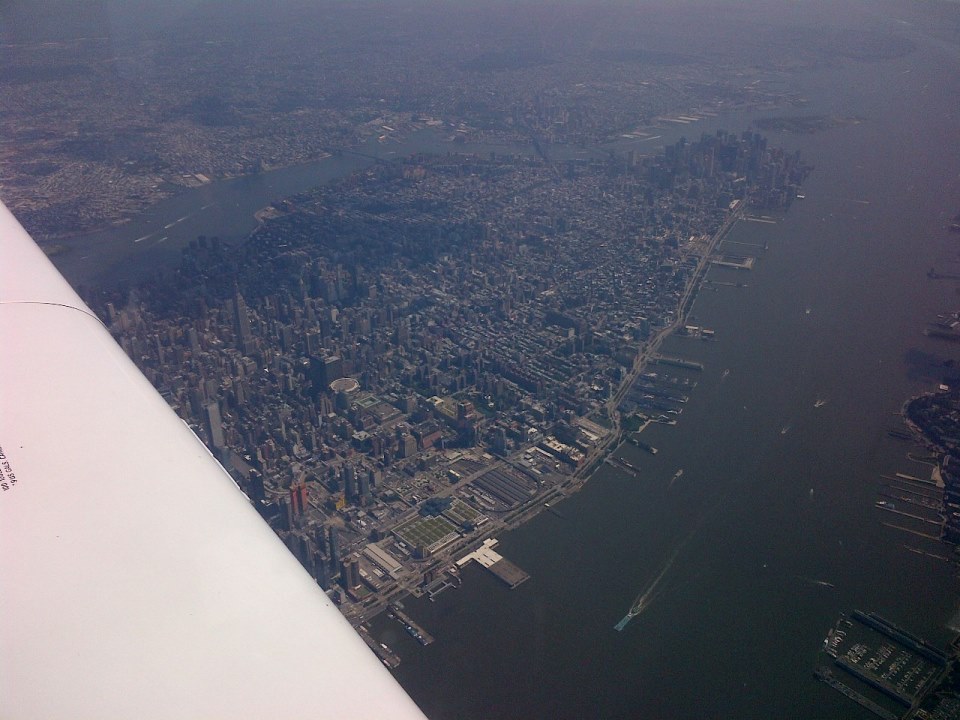 Hello to all...been a while, hope you've all been well.

My most recent excursion in the NYC Class B airspace: Central Park, taken yesterday (8/9/16) from the Hudson River at 1,500' by my wife. Upper West and East Sides below us (the building with the two towers right in front of the park is straddled by West 90th and 91st Sts.), Astoria and Long Island City (in Queens) on the other side of the East River, and (if you look closely) KLGA is off to the far left in the distance with water both in front and behind. 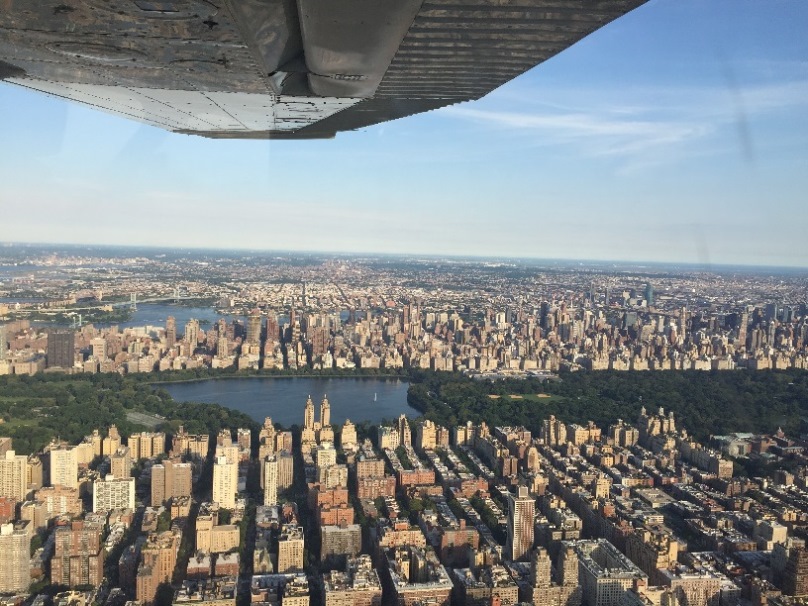